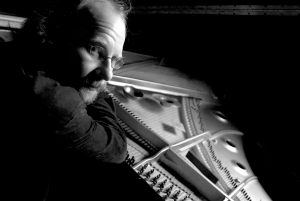 Carl Ludwig Hübsch: „Scott, when you listen to improvised music, how can you tell it’s good?“

Scott R. Looney: “Probably the best moments are for me when the whole thing becomes a sort of an amalgam and the individual personalities disappear into the totality of the sound. Those are my favorite moments, when it doesn’t sound like it’s like an ego fest by anybody. I think in general for improvised music there’s a very communal kind of approach, and I find that my favorite moments of improvised music are when that approach makes it so that I almost don’t know who is playing what. Like I get very similar kinds of textures or even feelings from everyone and it just seems like a big communal whole and I don’t feel like identifying anyones part as much.“

Hübsch: „Is that the difference to composed music?“

Looney: „I don’t know. I would certainly say that a piece of composed music has this stamp of the composer’s attitude. But it depends of how the composer is leaning as to whether that comes out as a very individualist kind of response or someone that that encourages improvisation or some variance of interpretation of the music.

So, it all depends on the kind of composer, I suppose, in terms of like whether they are really exercising a lot of control or they’re thinking about it as more of a collaborative aspect between themselves and the performers.“

Hübsch: „Which other qualities does an improviser need to have?“

Looney: „I think a very deep experience with a lot of different kinds of music. At this point when you have things like YouTube and stuff like that, there’s literally no reason why you can’t listen to every kind of music under the sun. Also knowing that you’ll never have listened to everything that you possibly can, but the idea is that you have to have a very wide sound palate, so that you know what’s out there, also so that you don’t repeat what other people have done before. In my opinion you can’t be in a vacuum and deal with this, because there’s tons of people who have been out here and doing this kind of work before, and it’s really important for you to be aware of as many of those people as you can. You don’t have to listen to every single album that they have ever done, but be aware of all the different kind of styles and things. Of course, you’ll never listen to enough but I still like the challenge of trying to listen to everything and all the different things that I can.“

Hübsch: „How do improvisers put their music together then? They don’t have any recipe, right?“

Looney: „Right. I mean the recipe is the moment, obviously. The recipe is what’s happening in a sound at that time. The idea is, I think, that if you listen to lots of different kinds of music then it basically gives you lots of different possibilities as to where to go in relation to the sound that you’ve just heard from somebody else.“

Hübsch: „So, you make a choice out of your memory?“

Looney: „I tend to think of my choices as being not so much conscious as more subconscious especially when it’s going fast, if it is going very densely it’s like you have no time to listen, really. You’re just reacting mostly. But yeah, it’s a tricky kind of thing.  It tends to get basically organized in the moment, but the idea is that if you have listened to a lot of different kinds of things and you have lots of different paths that you can go, it doesn’t just go in one direction.“

Hübsch: „Is it like an „emergency“ situation when you improvise?“

Looney: „Interesting. I definitely believe that an improviser has to have a serious commitment to their craft. It’s like every moment that you play a note, you should basically be meaning to play that note, even if that note isn’t the right note. So yeah, I definitely feel there’s an integrity to the sound and the people who are making the sound at that moment. And so, as result, I don’t believe in taking it not seriously. The way I think about is it’s like the Dutch improvisers, they are fantastic at that. Being able to be absurdist, but at the same time truly still committed to the sound that they’re making. The idea is that it’s important to do it and so as a result it needs to be conveyed. I think in terms of life or death, I’m not sure. But it needs to have a lot of commitment. I think you need to be committed to your sound absolutely.“

Looney: „Again I think that the thing about improvised music is that it has its very communal attitude. I know of no other music that I have ever heard of in which you can get three or four players all with completely unique different sounds that they can play together on stage. To me when it’s really working, it’s like the best kind of utopia you could ever imagine. Everybody gets to be an individual and they all get to make music at the same time that acknowledges the other individuals. And that quality I think is just one of the best things about improvised music.

When it starts to fall behind is when let’s say people aren’t taking it seriously or they fall in to various kinds of typical approaches that they like to take or something like that. And this is why I say, if you’ve listened to lots of different kinds of music then you have lots of different possibilities as to what can happen.“

Hübsch: „How do they connect then?“

Looney: „Well, you connect basically through sound pretty much, I mean you’re listening to the sound that people are making and then you react to that sound with sound of your own.“

Hübsch: „So, the sound is communicative?“

Looney: „Absolutely, yes, absolutely, yes. The sound, the energy of the moment is very definite and for me it has a very communicative impulse. And then I have a choice to whether do I want to go with that impulse or do I want to kick that in a different direction, and then will people listen to me when I do that or not? I don’t try to think about whether that’s going to happen or not, but those are choices that I have before me.

Hübsch: „But these are choices that somebody who plays composed music doesn’t have?“

Looney: „Correct, because the idea is that I didn’t know what you were going to play because you’re not playing from a score. So therefore I wouldn’t know that you were actually going to play that theme. But the idea – Roscoe Mitchell actually put this very nicely – is that when you play with an improviser you don’t want to just simply follow them, get into this whole like honk squeak kind of thing where I go beep and you go boop, and all that kind of thing. But at the same time it’s like if I make a really loud sound next to you, you’re going to have to react to it in some way, with some particular texture and I’m going to have to react to it in some way after that.

I personally love the challenge of the idea that I don’t know what someone’s going to do, yet at the same time I do kind of know because of my wide breadth of listening to all these different kinds of music, sort of what I’m going to expect at least in a ball park range, you know what I mean? And because I’m familiar with all of those different kinds of approaches, I’ve got a possibility to react to it even if it is not exactly the same thing.“

Hübsch: „So, should an improvisation be judged on that quality of how the players communicate?“

Looney: „Yeah, for me, definitely. I mean and I can tell when it’s not happening.

Hübsch: „Ok, Scott, here is my last question: what is typical to the Bay Area improvisers?“

Looney: „I would say that the Bay Area improvised music scene is more unique in the sense that it tends to go for a more European sort of improvised music aesthetic than most places in the United States that I know of. One of the things that the scene here tends to have is a really, really good sense of timbral modification, like all kinds of different sounds effects and all that kind of stuff. Where it may be falls a little bit short is in the pure musicality factor, there’s only a very few people who can handle both of those extremes of like going completely into the sort of noise and sound effects kind of thing, and then also really knowing how to get around harmonically and understanding the tonal centers and things like that.

Usually in the Bay Area you find people who are good at one or the other of those two things, but there’s more of an emphasis in the improvised community anyway on this more timbral modification, kind of a noise-like quality, and the best of us, the people like let’s say, Tim Perkis and folks like that, they have a quality where they can totally get with people harmonically, because they’ve got ears in that direction even though they are doing all this weird timbral stuff, they can totally listen in that way. Chris Brown would be another one, there’s some very high shelf people.

When it’s really happening, I find it to be one of the most interesting and original kind of concepts because, say in New York, there’s a little bit more of a tendency to want to do a compositional approach all the time and it tends to fall into more of a gambit kind of orientation and a little bit less of the sort of communal free jazz, communal improv that is textural in nature. There’s not as much as the textural improv in New York by any means, it’s much more like notes, and of course those people are really good at that, but they fall down when it comes to the really textural type of improv. I think the Bay Area is best at that.“

Hübsch: „Thanks for the interview, Scott.“