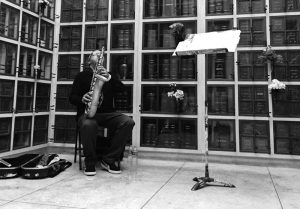 Carl Ludwig Huebsch: „From the point of view as a listener Philip, how do you tell whether an improvisation is good or not?“

Phillip Greenlief: „Well, perhaps it’s easier to say what isn’t good than what is good. It’s hard to describe these things – but if the person playing seems in their head and self-possessed and not really thinking about the room – that’s not a good thing. But just when it’s good, I stop thinking. I’m just listening“

Huebsch: „What makes you feel good about contemporary improvisation?“

Greenlief: „When I’m listening to a great improviser, I just lose track of myself and my thinking. I’m not analyzing anything. I’m not saying ‘oh, they just did that again‘. I’m not arguing with the performance in my head. It’s communicating to me and I’m listening and I’m open and receptive. Sometimes it’s you, you can be tired and your mind just doesn’t want to pay attention. I think that’s the case with any art form, whether it’s a movie or a novel, or a painting in a gallery.

Huebsch: „What is special about improvised music then?“

Greenlief: „I don’t know. I don’t seem to have any kind of hierarchy between composed music and improvised music.“

Huebsch: „Then what is the thread that improvised music is woven with?“

Greenlief: „Well, if we’re talking about traditionally notated music, the way the music is sculpted in time is very precise and linear – there’s a logic in place. Improvised music gives you the possibility of surprises in a way that maybe composed music doesn’t, but these are such generalizations that I’m giving you.“

Greenlief: „As much as any art is. I think it all depends on the improviser. I find there are a lot of improvisers that don’t want to accept this responsibility that they’re communicating something, and I think you can get hung up about your concept of what it is that you’re trying to do. I just like playing. I mean the less I think about a sort of conceptual or cultural construct that I’m supposed to fit into when I’m improvising, the better I feel and then probably the better the listeners feels.“

Huebsch: „Is there something an improviser needs to know, or a skill that s/he has to have, which an interpreter of music wouldn’t have to have?“

Greenlief: „Well, you have to know who you are. I mean the more that I play my instrument in an improvised situation, the more I have to dig into myself. The more my identity comes out in the work. That’s a deep and honest thing. Nabokov said: ‘beware of ideas’ – i like that. I’m wary of ideas, of running concepts in my music. I want to remove concepts from my music. I just want to play my horn, the more you play your instrument, the more you develop your technique. Technique should act as a service to free yourself, so that you can express yourself in more ways and not be limited by your fingers and your chops and your muscles or your lips. You want to be able to run in any direction, that’s the best thing. That’s the best feeling when I’m improvising is when I feel I could play anything and somehow it would work. That’s a great feeling.“

Huebsch: „So, this is a special thing about improvised music, isn’t it?“

Greenlief: „Yes it is. Yeah, the very nature of being free, which we’re all searching for in one way or another, whether it’s political or in your day to day life, is trying not to be restricted.“

Huebsch: „What is the freedom in the relationship of players of an improvisation? What happens between the players?“

It’s this ability or this challenge to be very awake and lose yourself in consciousness, and not be muddled by anything. And if you can do that with another human being, it’s exciting, it’s liberating, it feels like it replenishes me physically, spiritually, or mentally in some way that I can’t describe. I think it works on some other form of intelligence that is different than logic.“

Huebsch: „If you think about interpersonal relationship between the players, what is happening between them? Are they exchanging some kind of information?

Greenlief: „Perhaps. We are moving air around, we are making vibrations, because that’s what music. That is the pure physics of music. We create tones that have overtones, and those overtones vibrate in different ways. We are shaping things, it’s a lot like sculpting air.“

Huebsch: „Do musicians resonate with each other?“

Greenlief: „Yeah, I think there is that. I think that’s why it feels so good to do it.“

Greenlief: „Well, you get the impression of whether or not they’re listening to each other. And that doesn’t mean necessarily that the evidence is that what they’re doing is consonant. There can be a lot of conflict in the music, but they’re paying attention to the way that the sounds are behaving. That’s very important in improvised music.“

Huebsch: „Should that be also a matter in reviews or in speaking about improvised music? To describe how the resonance between the musicians takes place?“

Greenlief: „I find it very hard to write about music and I find that there aren’t a lot of people who do it well. I think music is working on some level that’s a kind of meta language that’s different than the human language. Or maybe I’m just looking for an excuse. I find it very difficult to say what it is. I just have this hunch that music satisfies something that language can’t. You’re able to say something that you can’t say with words. It’s a totally different need, but it does feel like a real need, a desire for it, both in the performance of it and just as a listener, to sit and listen to it.“

Huebsch: „Do you resonate with the audience?“

Greenlief: „Sure, I’m trying to. I mean that’s that word, that’s that phrase ’playing the room’. You play the room, you play the sounds that you’re making, and you’re conscious of how those sounds are existing and behaving in the room, and you know that there are people there receiving them, they are the receptors, right?“

Huebsch: „So, maybe the additional information in an improvised sound, is not only the way how you evoke it, but also how it works as a means of interaction?“

Greenlief: „Yes, yes. If I catch you right, what you’re saying is am I aware of the listener and does the listener’s presence shape what I do. Yes, I think it does.

I mean either side of the concert hall, either side of the line between the stage and the audience, however you want to blur that line, yes. What was so interesting about last night [referring to a concert in which eight musicians were spread each in a different room in a house, playing together a score by Phillip Greenlief] was the way that the audience was able to walk around the house and have just every step that they took change the experience, right? Going from room to room, walking down the hall, you walk 10 feet, you walk 1 foot, you walk downstairs, every place you go, you’re having a new experience because the sound and the vibrations are changing in the space.“

Huebsch: „Anyway, I’m still I’m very interested in that question – whether a sound in an improvisation has this kind of second level of information which is its interactive potential. Do you find that an interesting thought? Of course we don’t want to look at this while we are playing, but if we listen to improvised music and if we reflect on it, I think that’s something that needs to be reflected too.“

Greenlief: „You mean to discuss or to write about our experiences of improvised music, you think that’s important? Is that what you’re saying?“

Huebsch: „No, I just mean that improvised music would maybe be received easier if people would take a handle on these aspects of listening.“

Greenlief: „Well, certainly. It’s one thing that I work on with my students, just exposing them to new music again and again throughout the years, that they’re with me I want to play a lot of different kinds of music for them. The brain has to map – well, I’m reading, „This Is Your Brain On Music“ right now and he’s talking about the physiology of listening and how the ear maps tones. The ear has a real intelligence in the way that it receives these tones and these vibrations, and what I’m learning is even if you make a sound without a clear fundamental, the human ear will fill that fundamental in.“

Huebsch: „Do you sometimes call other musicians while you play, when you feel that you want to make a closer contact?“

Greenlief: „Well, yeah you can do that through imitation or just kind of call and response tradition, even though it can be very complex. And I mean just yes, zero in on frequencies and work the frequencies together.

Huebsch: „So, I ask you the last question. What is typical for improvising musicians from the Bay Area?“

Greenlief: „Well, that’s a difficult question because there are different generations of musicians working here. Some of the generations have been under the tutelage of various masters that have come through. Like Pauline Oliveros, who inspired so many of us to consider the deep listening principles that she exposed in her work, and she was here for a long time. And that seems an important part of what a lot of Bay Area improvisers have in their toolbox. The other thing is this ability for acoustic instruments to be able to speak the language of electronic music and to work with frequencies perhaps rather than notes, if that’s an easy way to understand it.

That seems like something that quite a few of us are working on here, which is part of the electro acoustic improv tradition. This ability to step outside of the tonal system and not be holden to it, and to work in a post-Cage, ’all sounds are musical’ kind of approach. I think there are elements of that in the Bay Area aesthetic, but again I think it depends on the generation of the player to some extent.“

Huebsch: „Thank you very much, Phillip.“