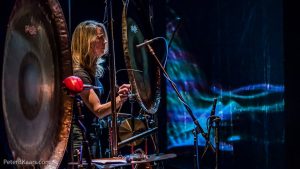 Carl Ludwig Hübsch: „From the point of view of a listener, how do you tell whether an improvisation is good?“

Karen Stackpole: „I think that the sounds have a flow to them. You can tell that everyone’s connected by the musical conversations that are taking place – you could have a certain type of sound and someone will reply and then you get a conversation that seems to be happening amongst the musicians.“

Huebsch: „So, is improvised music conversation?“

Stackpole: „To me it is. It could be more like André Breton’s Manifesto of Surrealism, where you just have a stream of consciousness happening. It doesn’t have to make sense – it doesn’t have to be like sound of like sound, but something’s happening that’s flowing, and you can tell when people are relating to each other. I think that’s the best of all, when people are listening and responding to that. You can tell when someone’s not listening or running all over everything. I guess that’s a method as well when someone just kind of runs all over everything.“

Huebsch: „What kind of method would that be?“

Huebsch: „But it could work as an improvisation?“

Stackpole: „It could work, yeah, it could, yeah.“

Huebsch: „So that would be active non-listening or non-connecting?“

Huebsch: „What does an improviser need to learn that an interpreter of written music doesn’t?

Stackpole: „To stray from the printed music, to be able to not feel constrained by that music, to cut loose.“

Huebsch: „But is that not also a quality that an interpreter should have?“

Stackpole: „Yes, but I think if you have printed music sometimes you could be constrained by that structure… In improvised music you can have structured compositions with improvisation within the structure, but being able to move around more….”

Stackpole: „I think listening does that – that the players connect and that you’re listening. You’re either adding or playing something that others will join in on or vice versa. Someone plays a certain sound, or a phrase, and you can pick up on that and then add to that phrase – that’s what I meant by conversation. As an improviser I like to do that. For me improvisation is about working together to create a holistic sound out of multiple instruments. So that’s what it is. It may be different for other people, for what they do where it may be more about being disruptive. But where I find the most fulfillment in improvisation is that connection and getting into that flow of space, it’s like a meditation for me.“

Huebsch: “How do you make connection with the other players? You listen and when you play: do you send out signals?

Stackpole: „I think sort of subconscious signals and if you’re all kind of vibrating at the same frequency in your being, in your perception and what you’re emoting and feeling, then it gets picked up. So then it just builds into this cohesive sound that’s being created by multiple people, not just one. It’s not like I’m making this sound, you’re making that sound, someone else is making that sound and you’re all just playing separately from each other. It becomes this cohesive entity when you’re improvising with other people, if it’s working. I think that’s the best.”

Huebsch: „Would it seem interesting to you to make a catalogue of sounds, which classifies the events in more connective and less connective sounds?

Stackpole: „I guess that could come back to what resonates within each person and what they like in music.“

Huebsch: „So, you think it’s a very personal thing what you can detect as being connective or not?“

Stackpole: „Yeah, I think it is subjective for every person that’s listening. Some people like dissonance intention, and other people may like harmonious interaction. I like a mixture of both personally. I like it when things can explode, but I also like it when it’s very understated. Today, when we we’re playing, I played a note on the gong and then you played a note and I loved how those notes and the resonance blended. It made me happy. And little phrases and impish little replies, I like that. I like music that is engaged and connected that everyone’s sensitive to – they have situational awareness and add to it, and if there’s something that’s going to come out and be bombastic, that it’s intentional, yeah.

Huebsch: „One last question, Karen, what is typical of improvising musicians from the Bay Area?“

Stackpole: „Well, I’ve been into improvisation since 1991, and was a total rock drummer before doing that. My entire experience was getting into the Bay Area scene, and back in the mid to late 90’s, it was extremely supported – there were lots of venues, I found it fun, and people were accepting. I guess there have tended to be factions from time to time based on experiences, so there’s kind of the Mills set, and other kinds of subsets around, but they do integrate.

Huebsch: „Were the factions there already in the 90’s?“

Stackpole: „I think I didn’t notice it as much. Back then it seemed to be just one big thing. But I do know that if I play with Mill’s graduates, there is a certain ethos, and then there are other experiential sets as well…”

Huebsch: “Charged points of agglomeration or something like that?“

Stackpole: „Yeah agglomeration, that’s a good word. One aspect I like about the Bay Area improvisers is the experimental instrument builder set – the creativity factor is high. It’s hard to put your finger on one thing – there’s a lot of variety. There are lots of personalities and some people feel strongly and some people just flow with whatever is happening. I’m of the latter; I like to flow with whatever is happening.“

“You know what this reminds me of? Back in the 90’s, John Shiurba, a great guitarist and improviser, used to have this Sunday morning Coffee Klatch, and he’d invite a bunch of improvisers to get together and have some food and coffee at his place and then we’d play in his kitchen. He would record it and all sorts of different people would show up. It was so much fun, it was so fulfilling. I get a little jaded sometimes after 20 some odd years of playing improvised music I have to admit… like you said what makes good improvisation? Sometimes I would feel like it was more kind of like just playing and it makes no sense and it’s kind of okay, right? But then there’s good improvisation, like today, it was great – and it reminded me of those early coffee klatch days with just really great improvisers, really great sounds, really great flow and connectivity, and it made me happy inside. It made it feel worth it to put energy into it. To me that’s what makes good improvisation. It feels like it’s worth it to do it, right? It’s fulfilling, you get kind of a high from it, that’s how I feel. And you can feel that way also when listening to really good improvisation. You can tell when it’s happening.”